How to Make a Paper Mache Volcano That Looks Incredibly Real 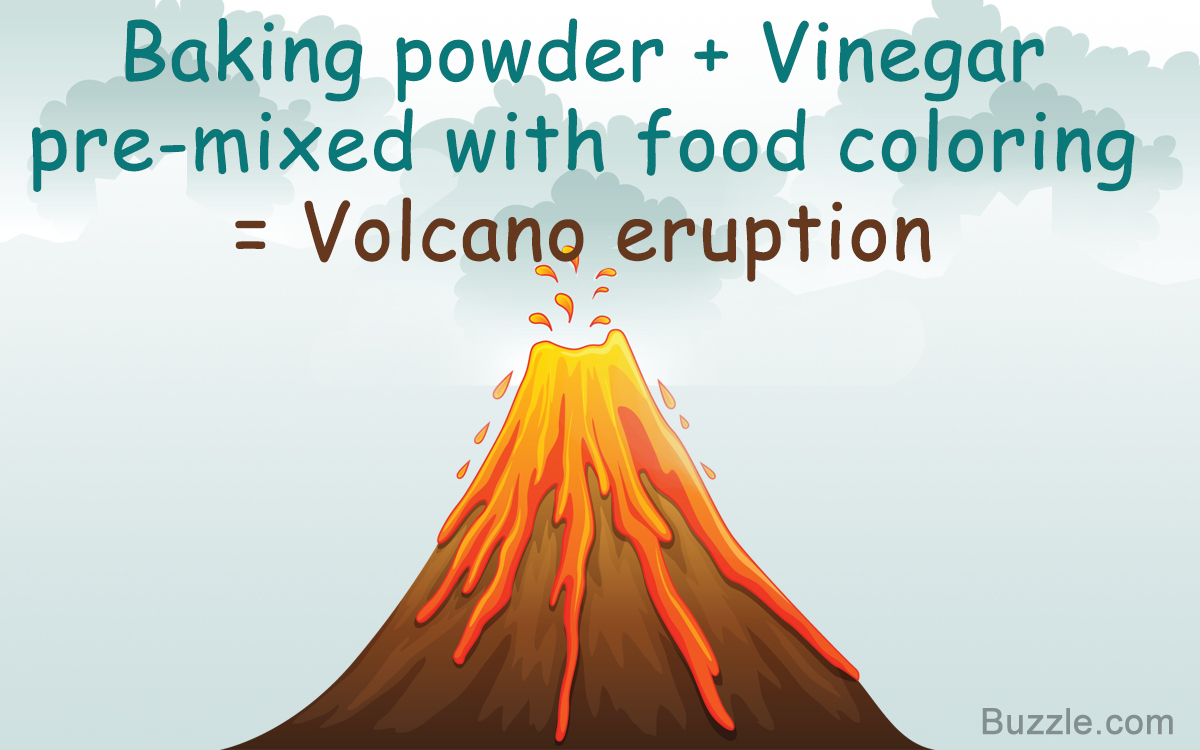 Paper mache or papier-mâché or simply chewed-up paper can be used to make awesome paper mache crafts. One of the coolest paper mache projects is paper mache volcano experiment. This is a pretty popular science project in schools. It will help you to understand the different layers of the volcano and also how the magma comes out of the volcano. But, more than learning about volcano, creating one is so much more fun! You can create your alive looking volcano by painting it green, red, and planting small twigs around it so that they look like trees. Also, you will make it alive by demonstrating the lava eruption. So, let’s begin! 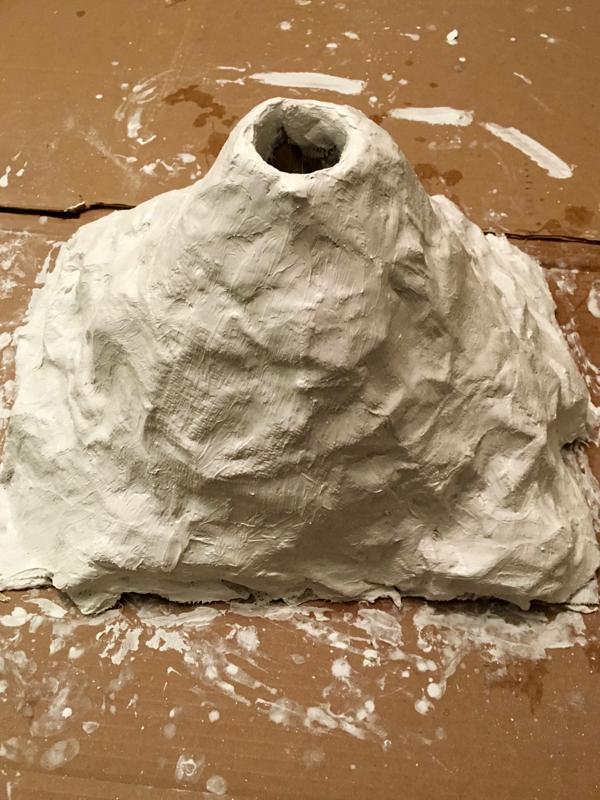 To make the paper mache paste, you need:

Listed below are the directions to make a paper mache volcano frame:

~Take a bottle with a flat base. Now cut the opening of the bottle; this will be the outlet for the lava to come out.

~Making the surface of the paper mache volcano is similar to forming the sides of a pyramid. Take four equal triangle shaped cardboard of around height 40 centimeters and 25 centimeters width.

~Now, take one cardboard piece and stick it to one side of the bottle, with masking tape running from the bottle to the base of the cardboard. Inside the cardboard and bottle stuff-up some paper rolls.

~For the other three sides of the volcano, repeat the above procedure.

~In a bowl, mix flour, glue, and water together. This is one method to make paper mache paste. Some people find the smell of paper mache annoying. You can make papier-mâché with other recipes as well.

~Now, take the newspaper strips and dip them in the paper mache paste. Now, holding the paper strip in one hand, remove the excess mixture lightly by running it across you index and middle finger. You will need plenty of such strips.

~You have your volcano body structure ready. Now with plenty of dipped paper strips, start placing them at the base and sides of the cardboard. This will make an uneven surface, like a natural volcano mountain would have.

~Leave the volcano to dry overnight.

Paper mache dries within few hours, however, it might take more than a day sometimes. This is because different locations have different levels of humidity. Some tips to dry paper mache quickly are:

~Work in layers. Use a hairdryer to dry one layer, and then paste another layer.

~Leave the paper mache volcano to dry outside your home, if it is dry and warm outside, compared to indoors.

~Leave the paper mache project under a fan to dry.

Before you start painting, check if the paper mache volcano is dry. Spray paint your volcano in whatever color you like. 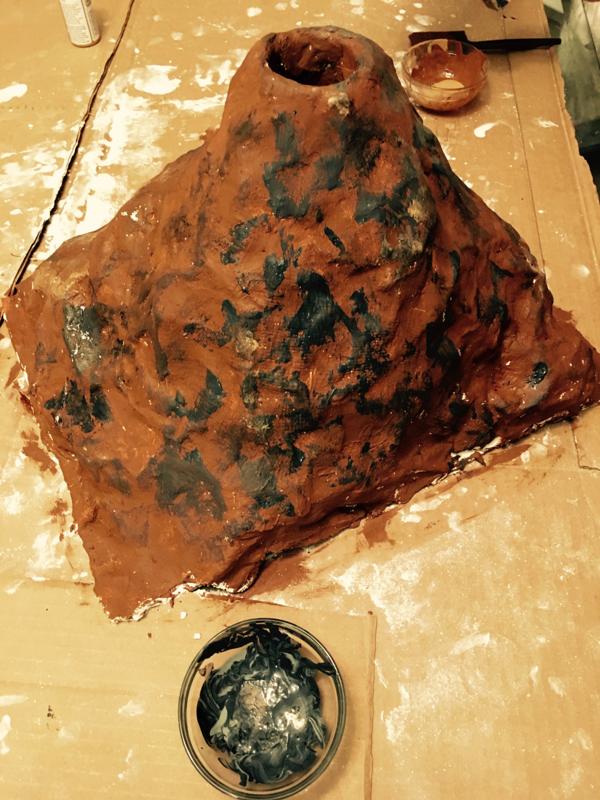 Spray paint your volcano green. On the top layer spray-paint it white to give a snowy effect. At the bottom, you can color it brown. Now, decorate it with models of different dinosaurs, trees, rocks, etc. You can buy plastic models or make them out of cardboard.

Spray paint the volcano, white and add some stripes of light blue color for more details. Add small models of houses on the slopes of the volcano to make it look real.

Spray paint your volcano green, and paint some blotches of dark green to give it a dense forest feeling. Paint the base of the cardboard blue for an oceanic effect. Decorate with models of people in colorful clothes, palm trees, boats, etc.

You can create a background for your volcano. On a rectangular cardboard, paint a background like the sky. Fold this paper twice and place it on three sides of the volcano to add more depth and fun to your creation. 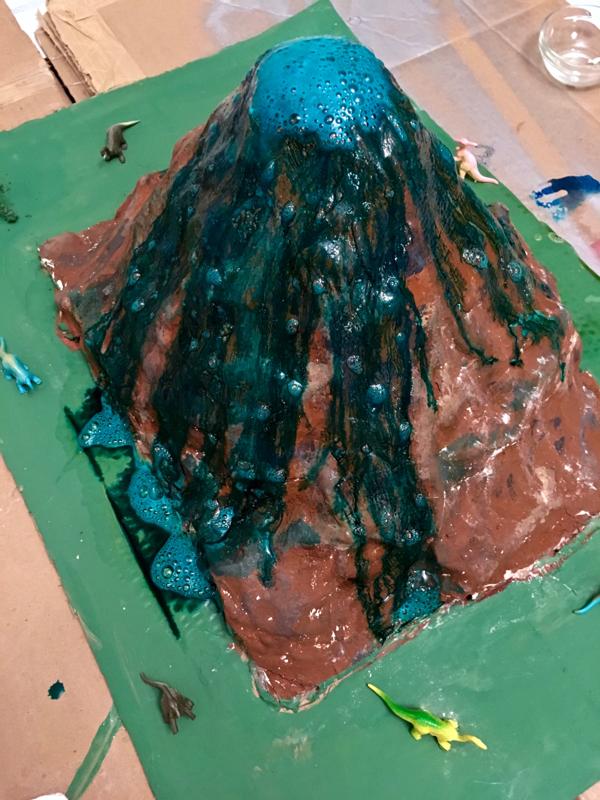 It’s show-time! Here are the directions to make a paper mache volcano erupt.

~ Pour baking powder in the opening of the bottle.

~ Mix vinegar and the food coloring in the jar.