A Brilliant Tutorial for Kids to Understand Tessellations

Tessellations - patterns of interlocking shapes. They are a good way to introduce math concepts to kids. Making tessellations turns out to be a fun art and craft activity. Here is a brief account of the history of tessellations, their use in old and modern art, and some information on how to use them as an art activity and a math exercise for kids.

Home / Uncategorized / A Brilliant Tutorial for Kids to Understand Tessellations 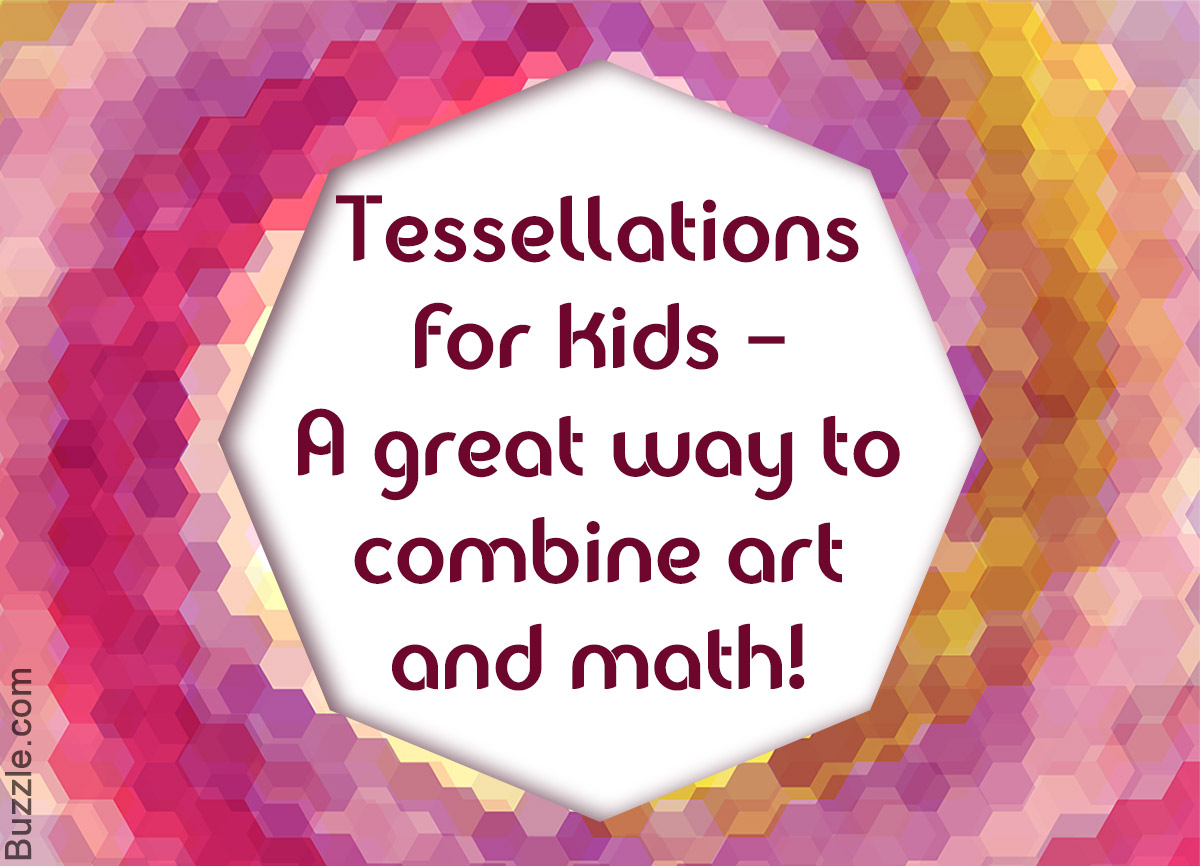 Tessellations – patterns of interlocking shapes. They are a good way to introduce math concepts to kids. Making tessellations turns out to be a fun art and craft activity. Here is a brief account of the history of tessellations, their use in old and modern art, and some information on how to use them as an art activity and a math exercise for kids. 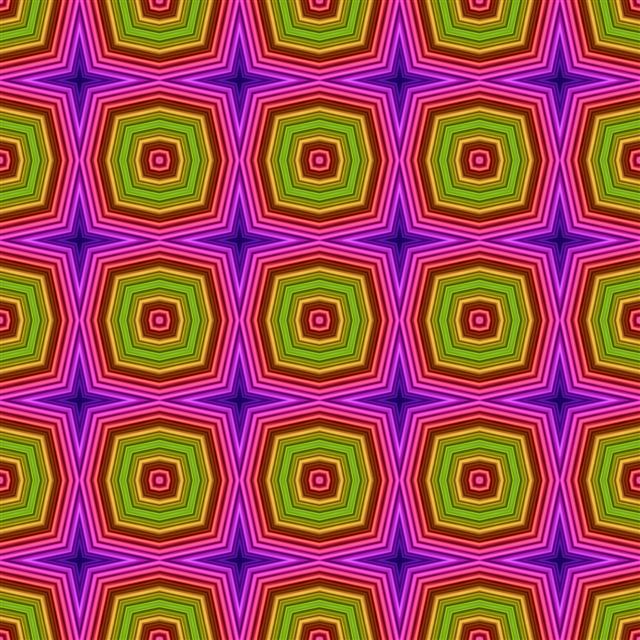 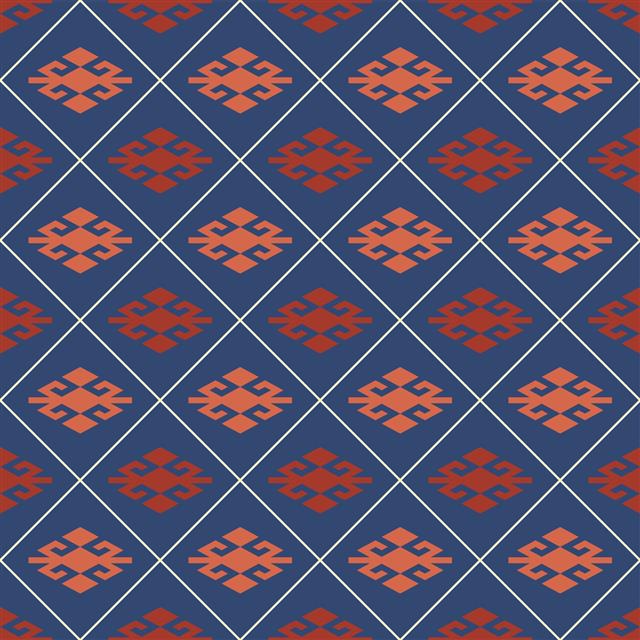 What’s common to a tiled floor, a brick patterned wall, the surfaces of a rubik’s cube, and a jigsaw puzzle? To confuse you further, what do all of them have in common with a honeycomb? Well, some of you might have guessed it right; they are tessellations.

What is a tessellation? It can be called tiling. It is a collection of shapes that cover a surface, leaving no gaps or overlaps. Now think of a tiled floor or a brick patterned wall. What do the tiles or bricks do? They cover the surface of the floor or the wall without leaving gaps. Think of a rubik’s cube or a jigsaw puzzle. Each plane of the cube is a tessellation of squares and so is a jigsaw puzzle of random shapes, shapes that fit into one another, fully covering the surface. 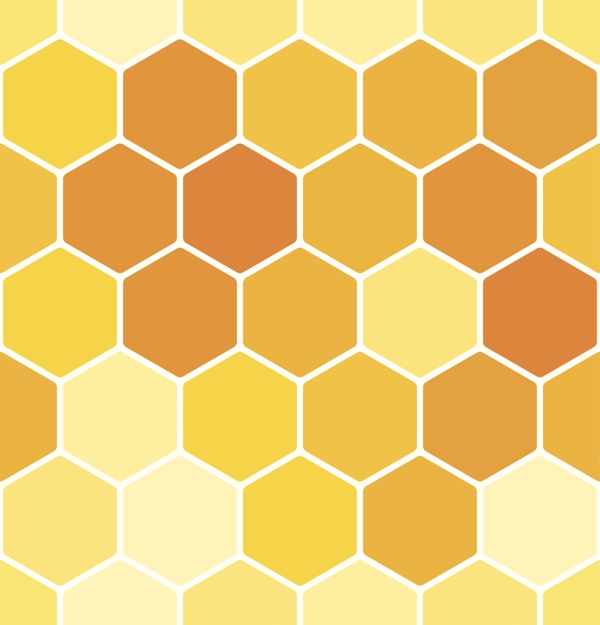 A honeycomb is one of the classic examples of tessellations in nature – identical hexagons that seem to fit into each other forming a distinct pattern that is unique to a beehive, a tessellation of hexagons.

Now this can serve as an interesting introduction to tessellations for kids. It’s sure to gather their attention towards the subject and explaining tessellations in greater detail should be easier now. But before you give tessellation examples to the kids or teach them how to make tessellation patterns, introduce them to the tessellations’ history in brief. 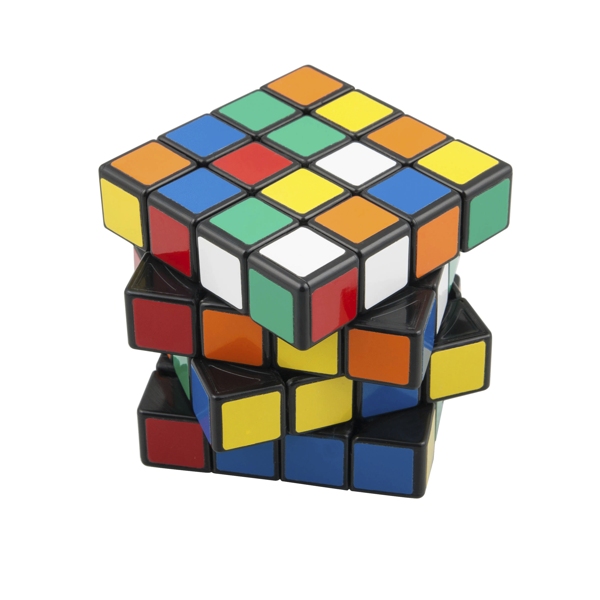 A Rubik’s cube is an interesting example of tessellations. Each surface of the cube is a regular tessellation of squares.

The word ‘tessellation’ is derived from the Latin word tessella, which means a small cubical piece of clay, glass, or stone. It also means ‘a small square’. Tessellations in the form of tiled walls and flooring are part of ancient architectural styles and designs. Examples of tessellations are found in ancient and modern art.

Artworks of the Dutch graphic artist M.C. Escher featured tessellations. Nikolas Schiller is an American map artist known for his kaleidoscopic aerial photography, which can be called an indirect application of tessellations.

While introducing kids to the history of tessellations, try to show them some tessellation examples in art. It will help them relate to the subject better.

Primarily, tessellations are of two types, regular and semi-regular. Regular tessellations tile a surface, leaving no gaps or overlaps. The characteristic of regular tessellations is that the shapes tiling the surface are regular polygons and of the same type and each vertex looks the same. In semi-regular tessellations, each vertex may not look the same and the shapes tiling the surface are regular polygons of different types. Now, explain to the kids what you mean by vertices looking the same. Firstly, tell them what a vertex is. Well, a vertex is the point at which all corners meet. Now, if the vertex configuration is to be the same or that the vertices are to look alike, the number of sides meeting at each vertex should be the same. 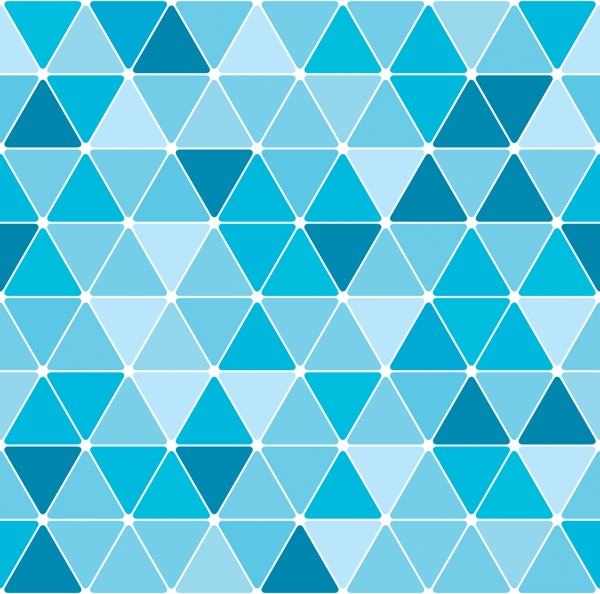 This tiled pattern can be considered as a tessellation of triangles or diamond-shaped figures. Due to the way the shapes have been colored, a pattern of small hollow circles can also be seen. Interesting, isn’t it? 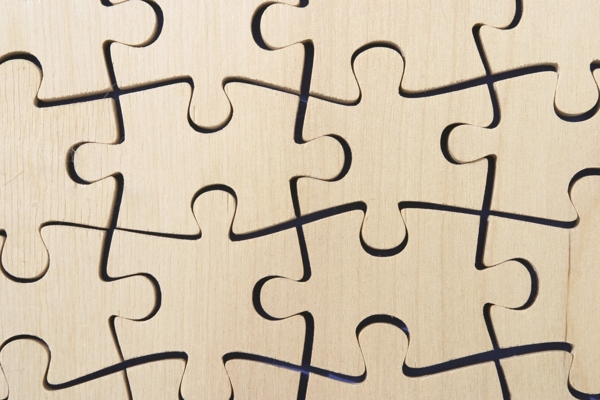 Jigsaw puzzles are a classic example of semi-regular tessellations. See how irregularly shaped figures fit into each other to bring out an interesting tessellated pattern.

For making tessellations with kids, you’ll need craft papers of different colors, a cardboard sheet, a pair of scissors, and glue. In case you plan to use plain paper, use crayons or paints to color it. Cut out some tessellations, or cut multiple shapes of craft paper and give the kids a plain surface to tessellate using those shapes. You could give the kids a rectangular or square-shaped cardboard and pieces of paper cut into various shapes. Ask them to tile the cardboard using those pieces.

Or involve the kids right from cutting symmetrical patterns. For that, take a sheet of craft or plain paper, cut the desired shape from one corner of the sheet. Then place the piece next to the cut region and cut a symmetrical shape. Ask the kids to repeat the procedure till the entire paper is utilized. The kids will then have multiple identical shapes to tessellate with. If you are using white paper to cut out shapes, give the kids some paints or crayons and ask them to choose one color for each shape and color accordingly. Here, you are combining the study of tessellations with math and art as the kids are identifying shapes and coloring them. 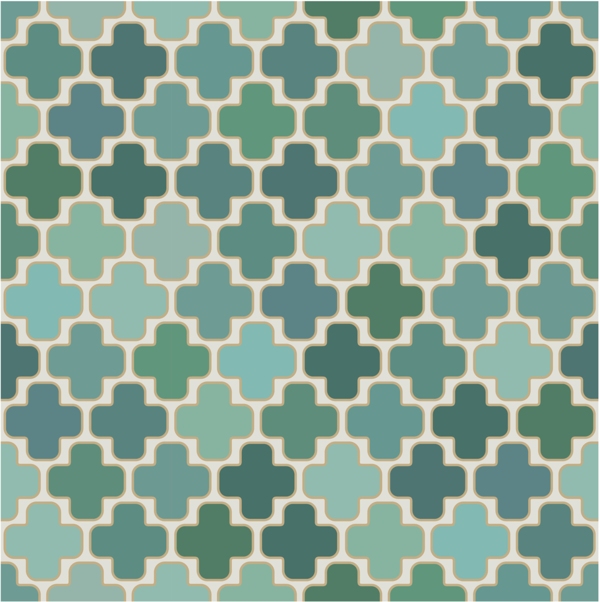 Observe the white space around each shape. Would you consider it to be the gaps left by the tiled pattern, making this tessellation an semi-regular one? Or would you think of this as a pattern of cross or plus signs fitting into one another, making this a regular tessellation?

You could vary the activity by cutting out shapes of animals and birds. Cut one for them and then ask the kids to cut multiples. Or ask the kids to cut irregular shapes for the tessellations. But here, you’ll have to ensure that the shapes complement each other, i.e. they fit into one another. With this tessellation art, you’ll be bringing together tessellations and math, as the kids will understand the difference between tiling with regular and irregular shapes.

Let the kids observe the difference. Then explain to them what it exactly is. Well, regular shapes like triangles, squares, and hexagons tessellate naturally while irregular shapes have to fit into each other to tile a surface uniformly. Also, after the surface is tessellated, ask the kids to count the number of sides that meet at each vertex in the tessellation, say x. Then ask them to measure the interior angle of the polygon used for tiling, say y. Now ask them the product of x and y. For a regular tessellation, the product xy will be 360. On the other hand, for an irregularly tessellated figure, it won’t be so.

For example, in case of a square, the interior angle is 90° and the number of sides meeting at each vertex is 4. 90*4 = 360. That’s a regular tessellation. Take the example of a pentagon. The interior angle is 108° and number of sides meeting at the vertex is 3. 108*3 = 324 which is not equal to 360. Conclusion – squares can tessellate a surface uniformly while pentagons cannot. Encourage the kids to experiment with different shapes and perform similar calculations to find whether a particular type of polygon can be used for regular tessellations or not.

You could also use your computer for tessellation activities. One way is to browse the Internet and search for online images of tessellations. The easy way out is to find an image, copy it onto your machine, and take multiple printouts of the image to use in the tessellating activity. The other way is to use the MS Publisher tool. Select the custom tools option from the tool bar, select a shape that you would like to use for tessellations, drag and drop the figure, and create multiple copies of the same. Paint the shape using the fill color option. Space out the shapes on the page and your tessellation pattern is ready. Allow the kids to experiment with using different shapes and tessellating them differently to create tessellations. There are some websites that provide you with pages to try your hand at tessellations. They allow you to pick a polygon type, choose a color(s), and tessellate a plain surface with shapes of your choice. Letting the kids access such online resources is another good way of simplifying tessellations for kids.

Tessellations are neither solely about art not about math alone. They are a combination of both. And that’s the reason why exercises involving tessellations for kids help them learn math concepts and also give them means to express their creativity. Hand the kids some craft paper, colors, scissors, and glue and let their creative juices flow. Once you explain to them the basic idea of tessellations, allow them to do just anything they like with the art and craft material they have. The kids might come up with something unique, something far from what you had imagined. Their tessellation of random shapes might turn out to be a jigsaw puzzle, a beautiful tile design, or perhaps a piece of art. 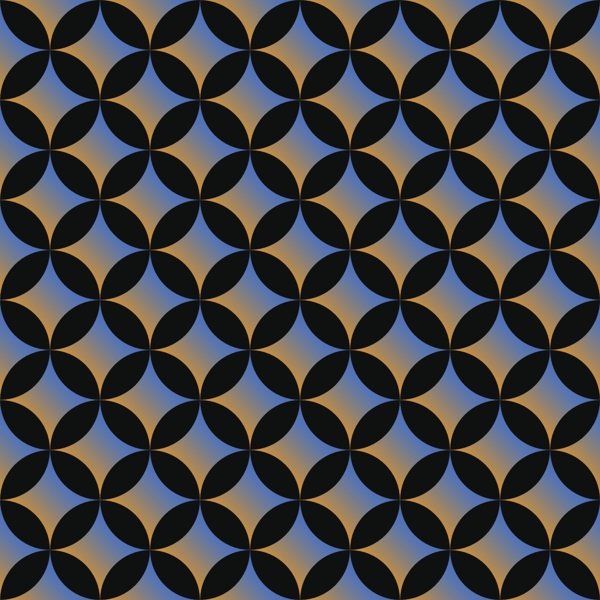 You know something? Repeating shapes that stretch over a large surface can give the effect of an optical illusion. A long stretch of tiled floor, a surface covered with intertwined rings, or repeating shapes using certain color combinations… they are tessellations, illusive in nature.

Tessellations can be used to help the kids grasp math concepts. Yes, they are not just another kids’ crafts idea. They blend art with math. Some basics in geometry can be best understood with the help of tessellations. For kids, it’s simpler to grasp things when ideas are supported by pictures and models as examples. 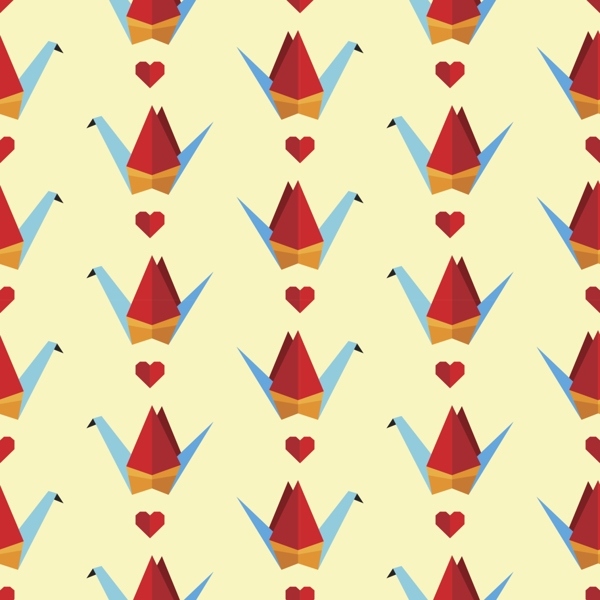 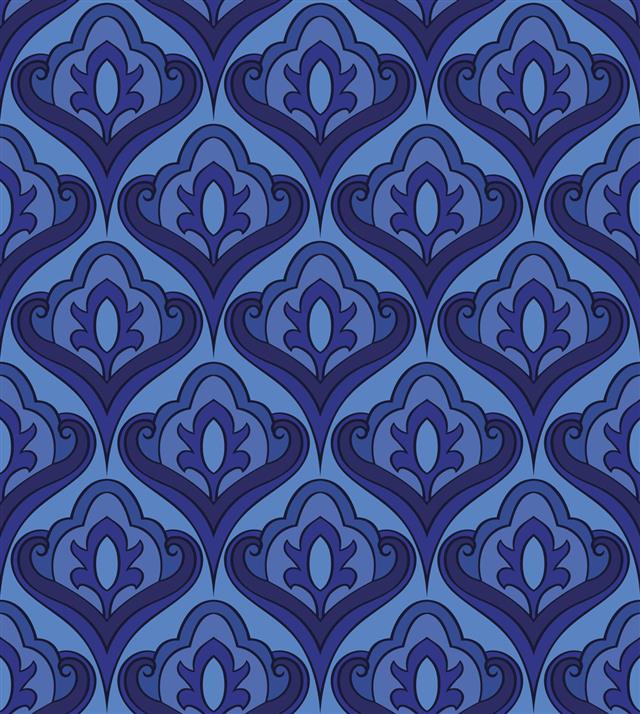