How to Make a Cool Starburst Bracelet With the Rainbow Loom

The Rainbow Loom has become very popular among children and adults alike. This plastic loom helps you create various pieces of jewelry in varying patterns with elastic bands. The starburst pattern is currently a rage on the Internet. Do you want to know how to can make a starburst bracelet? Walk through some simple steps that CraftCue has for you. 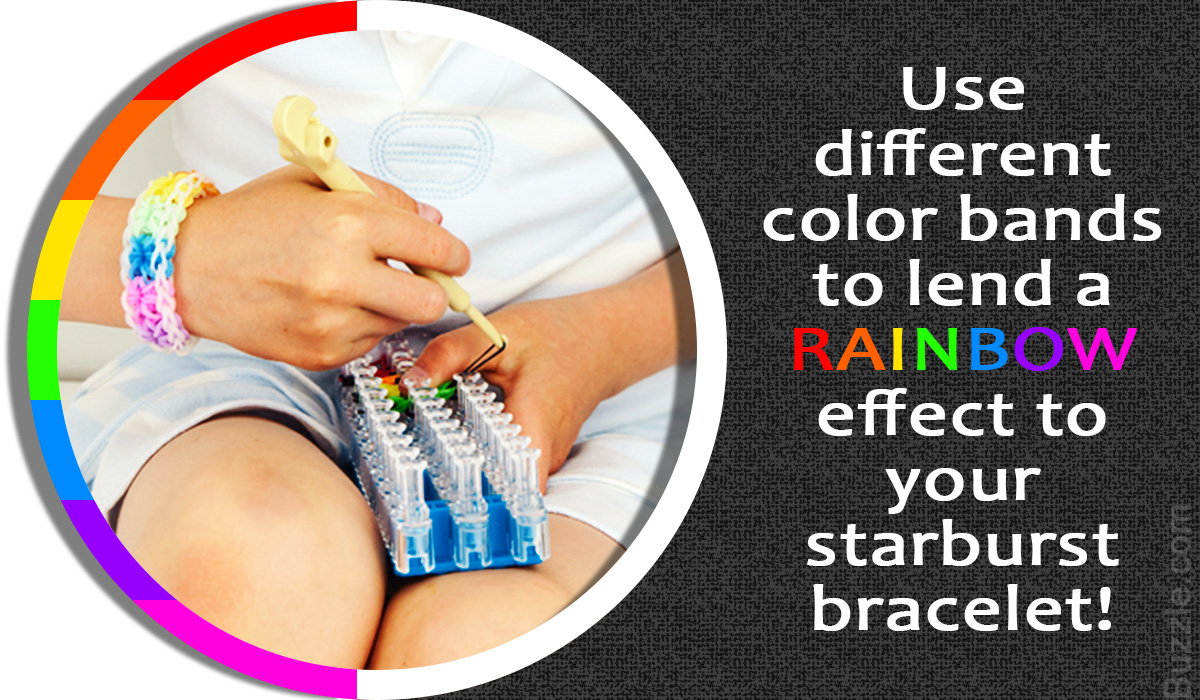 The Rainbow Loom has become very popular among children and adults alike. This plastic loom helps you create various pieces of jewelry in varying patterns with elastic bands. The starburst pattern is currently a rage on the Internet. Do you want to know how to can make a starburst bracelet? Walk through some simple steps that CraftCue has for you.

Even celebrities and prominent figures cannot resist the charm of the Rainbow Loom bracelets. The Duchess of Cambridge, Catherine Middleton, was seen wearing these colorful bracelets during her April 2014 tour of New Zealand

Various patterns can be created with colorful elastic bands. Simple patterns comprise the chain bracelet, diamond bracelet, and a few advanced patterns like zigzag bracelet, ladybug bracelet, etc. However, the star-shaped pattern has become a new craze among the Rainbow Loom lovers. The star burst bracelet can have several colorful stars in it. Get your Rainbow Loom kit, and let us begin! 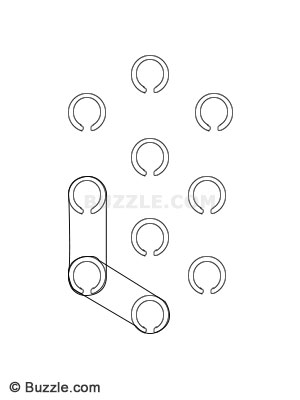 1. Place your loom with the arrow on it pointing upwards. 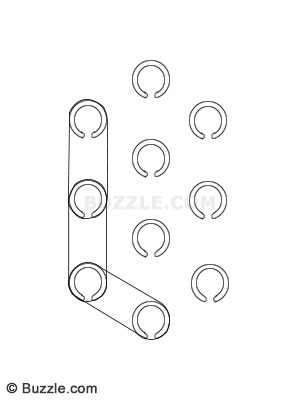 3. Place another band on the first left peg. Loop it to the second peg, following the first.

4. Follow the same way till you reach the second last peg. Place a band on the left peg and loop it diagonally to the middle peg.

5. Repeat the above process on the right side till you have got the bands around the perimeter of the loom. You have now made the border for your bracelet. 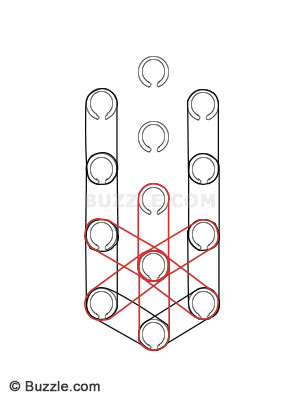 7. Follow this step clockwise till you obtain a star shape. 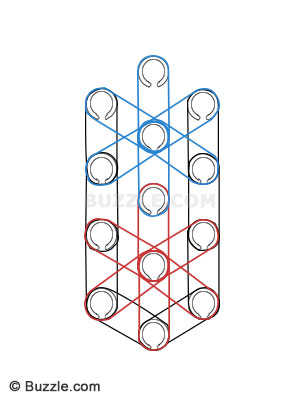 9. Follow the same process till you reach the end. You can use diverse colors for different stars bursts. 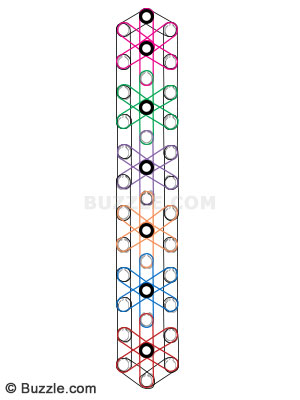 11. Remove it from your finger and place the doubled-up band on the final peg in the
middle row.

12. Place the similar doubled-up band on the middle peg of each star shape. 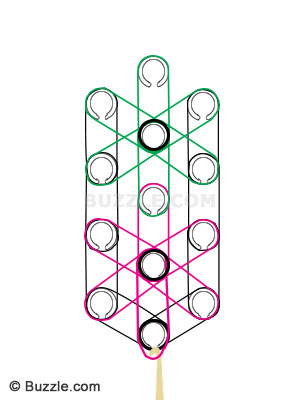 13. Turn the loom around so that now the arrow faces towards you. With the hook, catch the loop of the first star burst on the first peg in the middle row. Loop it over to the center peg of the star burst. Be careful. Do not dislodge any other band loops. Hook the band that loops from the second middle peg to the second right peg. Stretch the band from center, and loop it to the right peg. 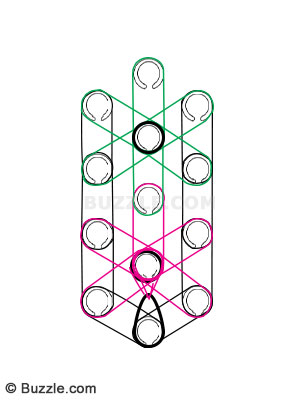 14. Hook the band that loops from the second middle peg to the second right peg. Stretch the band from center, and loop it to the right peg. 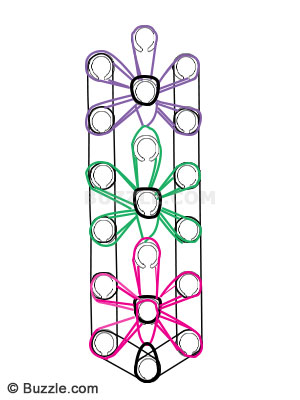 15. Follow the process counter-clockwise. You will obtain a shape that looks like a flower. Complete all the star bursts. 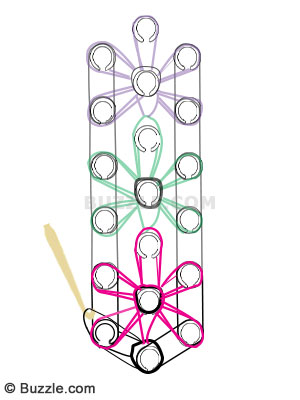 1. To secure the band, you will need to weave the perimeter bands just like you have weaved the star bursts.

3. Proceed till you reach the end of the left side, placing the last left side band on the last peg in the middle row. 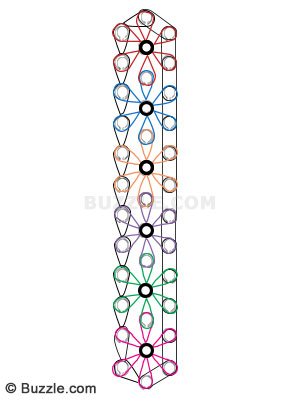 4. Follow the same process and complete the right side. 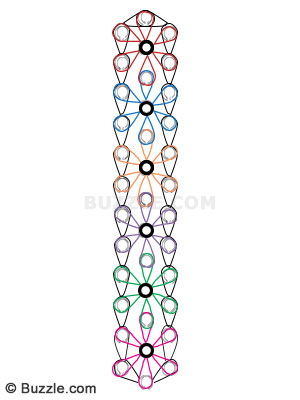 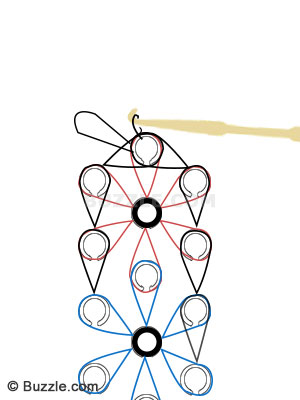 6. Hold the new band in your fingers, and stretch the other end through all the bands at the end of the middle peg.

7. Secure both ends of that band either on your finger or on the hook.

8. Pull the bracelet from the loom with the secured end. Your Starburst Rainbow Loom Bracelet is ready!!

Instructions to Add an Extension 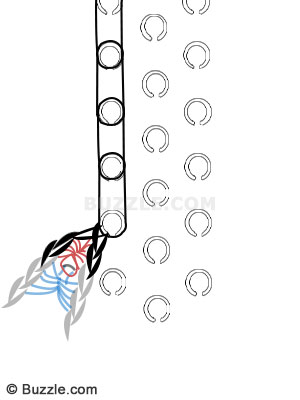 1. Place a band on the first and second pegs.

2. Add another band on the second and third pegs. Add as many bands as you need to this chain.

3. Add the end of your bracelet to the chain by stretching it to the two pegs.

4. Follow the same process as you did to secure the perimeter, and take the end of a band under the end of the bracelet, and place it over the peg at other end.

5. Repeat the process till you reach the end of the chain.

6. Pull the chain and the bracelet from the loom securing both ends by your hands. 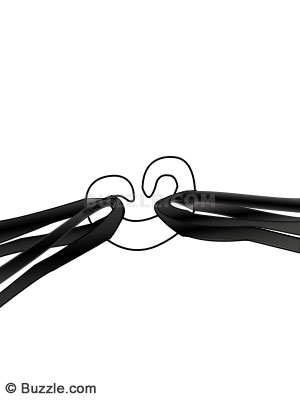 7. Attach both ends with a C clip. Your bracelet with an extension is ready!!

Make your own star burst bracelet and join the trendy bracelet gang. Show off the beautiful bracelet that will add appeal to your personality. During the rainy days, a self-made Rainbow Bracelet would be an eye-catcher.